Making predictions on how successful any Grouse Season is going to be is not easy, but this year it could be even harder!

We are back at that time of the year again, when we make predications as to how good or bad this coming grouse season is going to be. Never an easy task and it is even harder this year!

This is in part because of an almost universal disparity in the ages of the broods and particularly the number of late broods which Keepers are still seeing both in England and in Scotland. Counting grouse this year, because of the recent very hot and “sticky” weather (even in the very early morning which is the favourite counting time), has made things difficult and so on many Moors, counts are being conducted later than they would normally be.

However, we have already got a pretty clear picture of what we think the grouse are going to be for the coming season. Last year was the worst season over almost all the country, for a very long time and indeed it was in complete contrast to the modern perception that the “boom and bust” in grouse numbers had gone forever. Whilst modern medicated grit has significantly levelled out the peaks and troughs of grouse production, last year proved that the weather still pays a massive part and after an awful (and late) winter of 2017/18, the grouse were in such poor condition that in most areas, they failed to breed well in the spring/early summer of 2018. There were a few exceptions to this, particularly in the North Yorkshire Moors, but overall last season will go down as the worst for a very long time. This meant that on many Moors there was an out of kilter age profile of the grouse stock (too few young Grouse), and indeed a generally well below ideal stock level to breed from. We therefore needed an exceptional breeding season this spring, to make a reasonable recovery. This we definitely did not get! The early June weather, although it didn’t last long, was wet and cold (an awful combination) and although Keepers saw good early broods, most have dwindled dramatically since hatching.

We are therefore not at all optimistic that other than on one or two of the eastern Moors which have a reasonably good stock last year and which are lower lying and more sheltered, Moors in the Peak District will be poor and probably in the main very poor. We are talking about very low stock levels and awful chick survival over most of the Peak District Moors.

Going further north, the Pennines is a very mixed picture, but overall, it looks pretty gloomy. The worst Moors seem too be those at high elevation and exposed (where the affects of the adverse June weather was the worst), however, we know at least one Moor (managed by our sister Company, JM Osborne & Co), which is both high and in the west, which is completely bucking that overall trend. Indeed, they have just reported their record count on their highest lying land! This proves the difficulty with making generalisations. Whilst there are a few Pennine Moors, mostly lower lying and more sheltered which have reported a strong showing of Grouse, again overall we think that the Pennines are going in the main to be poor and in some areas really bad. We have already heard of a very significant number of days being cancelled and we believe that once the counts are completed, there will be many more cancellations.

The pattern of the eastern Moors generally being better than those in the middle and the west continues, with some positive soundings coming from Durham and east Northumberland, up into the Cheviots, but again the higher Moors or those with relatively bare ground with limited heather cover, don’t seem to have done well.

This picture continues into the south of Scotland with signs of fair numbers of grouse in parts of the Lammermuirs but they also appear to be suffering from high numbers of tapeworms being found in their grouse. Whilst tapeworms on their own are relatively often found in more mature grouse and seldom cause mortality, severe levels of tapeworms (like all worms), will increasingly weaken their host. What they will also do, is to increase the likelihood of mortality from other causes, including weather, stress etc. We understand that days there are now being cancelled as a result.

Slightly surprisingly, we seem to be finding a few pockets of grouse in the south and south west of Scotland (but not to any great extent!), and the picture for north and central Scotland is again very mixed. Overall, reports are of similar numbers to last year or not significantly better (with average brood sizes of 3 to 5 chicks), and we believe that this pattern continues up into the Highlands, particularly on the less exposed and lower lying Moors. However, on the higher elevated Moors, the combination of a very poor stock left from last season and the periods of bad weather this spring, means that on many Highland Moors there is no shootable surplus and indeed very little improvement in Grouse numbers from last year’s disastrous low. We suspect that Moors in the Angus Glens and adjacent areas will again by being on the east, fare in general rather better than their more western counterparts.

One additional factor this year, is the big amount of heather beetle which has been seen, almost over all the Moorland parts of the north of England and now in some areas of Scotland. We have seen more heather beetle in recent years than before and this trend seems to be continuing. Not only does this reduce the amount of viable areas for broods to live in (and they will almost always move to better feed), but it concentrates Grouse in smaller areas, which may cause other density problems to occur. Also there seems to be quite a high level of Coccidiosis being seen on a few Moors, which weakens Grouse, making them more susceptible to disease, worms and indeed weather.

Overall, if 2018 was the worst grouse season for a very long time, we have seen little to lead us to believe that 2019 is overall going to be very much better. Parts of the country will see an improvement from last year, but in others, sadly there will be very little change and indeed on some Moors, the picture will be even worse than last season. Moor owners will have to treat their stock very gently this year, to be in a position to make headway for 2020. However, perhaps the main problem we have going forwards, is that the poor age profile from last year is being made even worse. The question is are old Grouse better left than “no” Grouse?

For those who thought that “boom and bust” was over, we would merely suggest that nature is still the overriding force in determining whether or not we have any grouse to shoot and this year like last, nature has not been at all kind.

We wish you all some shooting. 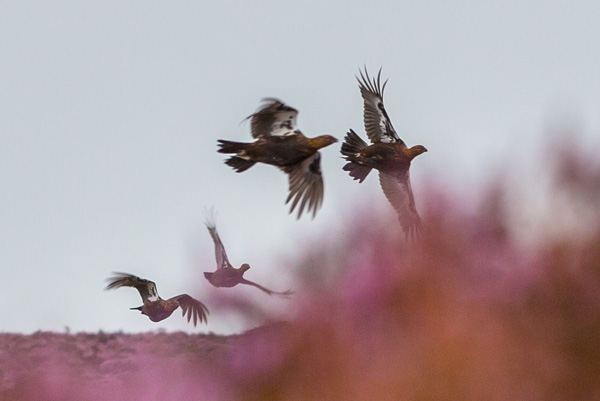