A glimpse into the life of a Sporting Agent's dog

Mole was my first Labrador and, although my family have always had a number of dogs, he was also my first proper gun dog. I lead a very enviable life in that I run the William Powell Sporting Agency based in Banbury and as a direct result of this end up attending/hosting/ managing over 100 days each season myself.  The actual business is involved in far more than this, but one person (and as Mole found out – one dog) can only attend so many days in a year.

My first sight of Mole was of him flying down a bracken clad hill on the Leadhills Estate in early 2006, leaping over a stream and then retrieving a hidden dummy from deep undergrowth. To be fair, my immediate reaction was that I was unlikely to be good enough for him rather than the other way around! He was very quick, across the ground then and even now he has a fair turn of speed some 10 years later. However, I also discovered that he had had something of a hard upbringing in that initially he would not come to me other than as a direct result of whistle blowing and was wary of any show of affection. I later discovered more of his early training and it certainly appeared to feature a lot of stick and not much carrot!

One of our first real experiences was counting grouse in Yorkshire. As he had been trained to retrieve shot game Mole was not a natural grouse “counter”, but it quickly became an annual event which we both enjoy and it is a good way to get fit. However, once the shooting itself started he quickly showed me how good he could be when well directed on the moors and these early season days have always been a highlight for both of us. We have been very lucky to have been involved in the grouse shooting world in the last decade or so when the numbers have risen so dramatically for all the well documented reasons.

These large grouse forays have also given the current crop of gun dogs far more work on retrieving grouse than many of their ancestors would have had many times over. On a couple of occasions when pickers up have been short and birds numerous, Mole has retrieved over 100 grouse in a day and he never tires of going backwards and forwards and helping me build a row of birds on any grouse butt.  In addition, he has an uncanny knack of quietly wandering off as we walk away from a line of butts and then reappearing at my heel with another fallen bird in his mouth. It would be fascinating to be able to tot up the value of birds retrieved by one dog over the course of his life. I suspect it would put everything else into perspective as to the value of a good dog!

Having always enjoyed grouse and indeed partridge, the pheasant days of November and December have perhaps not been quite so much fun for Mole. Certainly the volume has been there to retrieve but certainly in recent years the heavier cock pheasants have started to seemingly weigh more, and funny enough he has never quite understood the problem of trying to retrieve a long tailed bird when you are treading on that tail at the same time as trying to walk forward!

Wildfowling – has been a particular favourite and I have been extremely lucky to shoot both in some great locations – the vast majority on the foreshore.  Mole has always been a fantastic swimmer with an excellent tail acting as rudder with powerful strokes to chase down a diving Teal or winged goose across the hard sands of the Solway.

However, over the last couple of months old age has finally crept up and in February this year we had something of a seminal moment when I lost a brace of Pintail on an outgoing tide. We were standing in a flooded hide and I forgot that Mole had no raised point on which to gain visibility of the birds as they floated out in choppy water. Still, once again he taught me a lesson on what I should and should not have shot at in such a situation. It was a shame that we lost the birds though.

As with all dogs, Mole has his various traits – both good and bad.

While he has never really regarded himself as a dog, and generally ignores others (with exception of one yellow Labrador called Bruce who he is happy to spend all his holidays with) despite now being 12 years old, he will still produce sticks whenever we go out for a walk. When I have taken a stick from him and thought that I had successfully hidden it behind a bush, he will walk to heel for another 100 yards or so and then quietly disappear off to retrieve the stick and bring it back with a slightly sheepish look but still a frenetically wagging tail.

Sadly, he has now become very deaf and tends to do what he thinks is the right thing to do/wants to do anyway, and hand signals have become more important. I have learned over the years that he is dog who can only cope with dog food and is not to be fed sausages or other “elevensies” or problems arise. The son of one of my oldest American clients and a long-time friend once fed him a couple of black pudding sausages on the last day of a shooting trip which sadly reappeared later that day at the precise moment I opened the boot of the car outside the drop-off point at Terminal 4 at Heathrow Airport whilst unloading their bags for the flight home. Having no immediate ability to deal with the issue and conscious of the strict ‘no waiting’ rules in the area, Mole and I fled the scene rapidly and I can only apologise to those who arrived at the parking space immediately after us. Other than that he has always been a good, if somewhat soporific passenger and over the years we must have completed over 400,000 miles together.

My father has always told me that everyone gets one great dog in their lifetime. I suspect that I may have been lucky in having mine first. Mole is not without faults but many of them should be attributed to the owner rather than the dog and he has been a great shooting companion to me over the last 10 years and has taught me an awful lot in so many ways. He is curled up in his bed in the office at this time and will be firmly of the belief that he will be heading north come July/August again this year.

However, there is a young black Labrador named Badger who is waiting in the wings and the terribly difficult issue of succession is one which I am going to need to deal with over the next few months.

I keep a brief note of every shoot day I attend in a series of small books which cover every season completed. Sometime back in October my children suggested I started counting these up and we worked out that at about that time Mole must have attended his 1000th day. Having spoken with a number of people on shoot days since I think that this must be a fairly exception feat for any gun dog and, after giving it some thought, I decided I owed it to Mole to tell his tale to a few more…

⇦ Previous Article
Fog – The Spectre at The Feast!
Next Article ⇨
A Season to Remember! 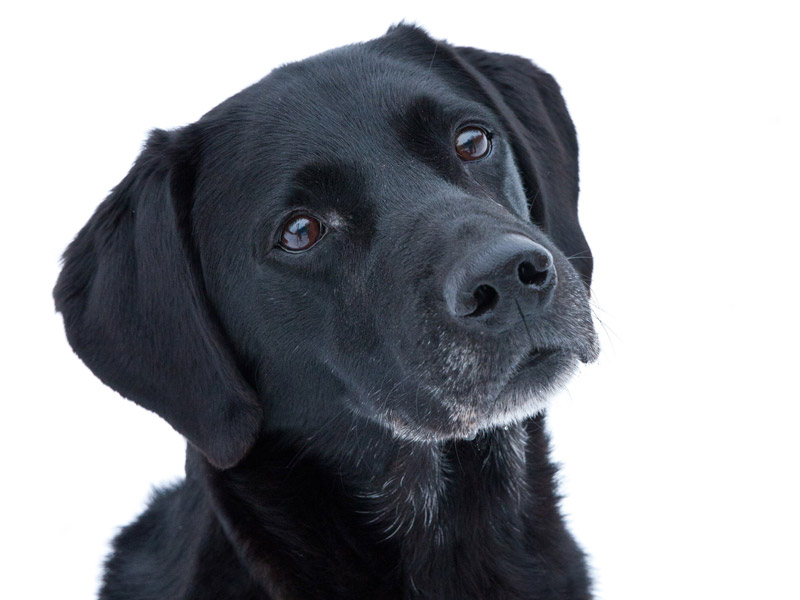 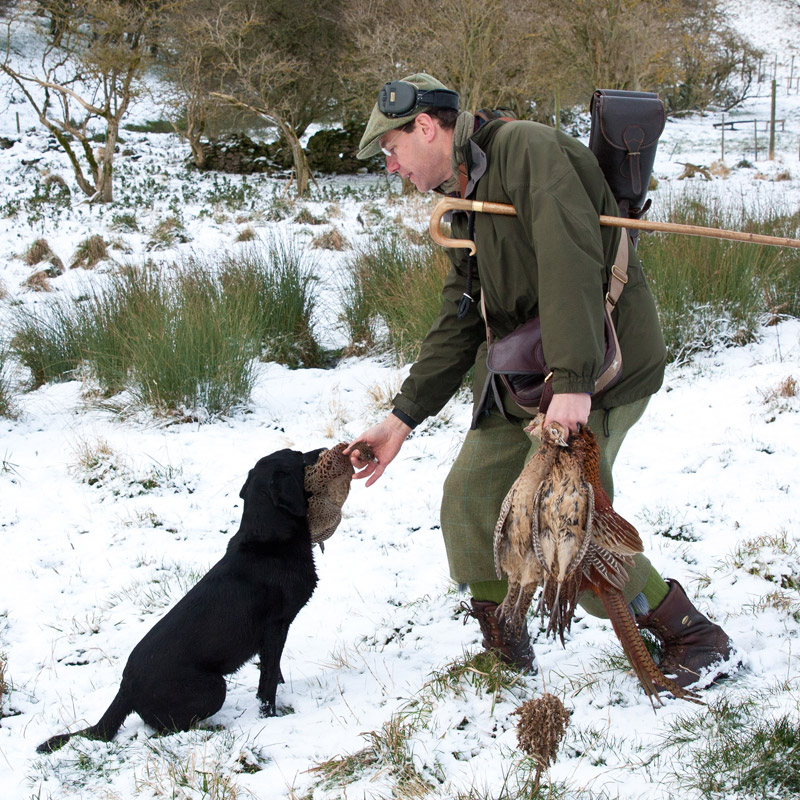 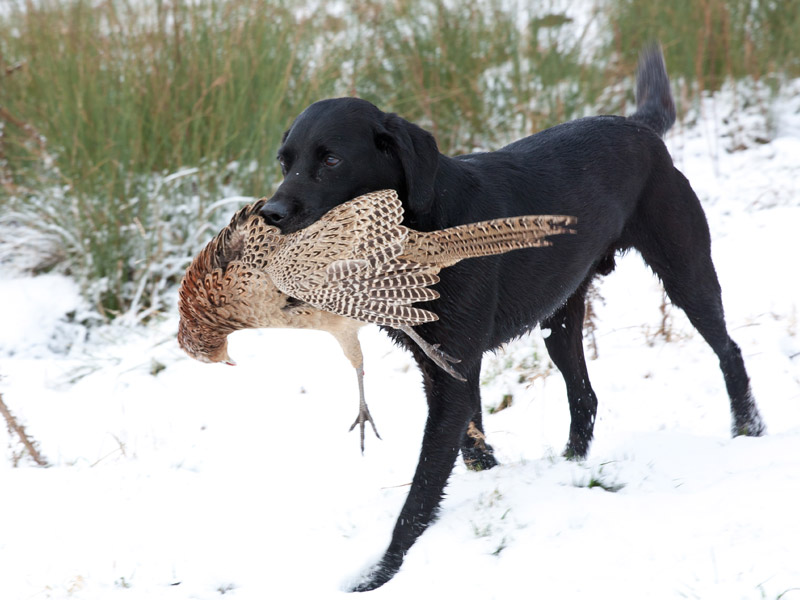