Forecasting what is in store grouse-wise for August, is rather like forecasting the outcome of Brexit. An awful lot could happen in a relatively short period of time.

However, our best guess scenario and from what we currently know, bearing in mind that there will be a large amount of variation even within individual moorland areas, is as follows;

Peak District – generally we think that the Peak District will mostly be poor-ish but with one or two pretty good hot-spot Moors.  This is purely because the of the low grouse stock left at the end of last “season” on the wetter and higher moors. Even if this stock breeds very well, there are unlikely to be lots of grouse on these particular moors.

Trough of Bowland – much the same as for the Peak District, with one or two moors which might be quite good, but with a lot of others that will still be pretty moderate.

Pennines – this will be very variable, with some moors good to even very good (and some excellent pair counts being reported), but again low individual moors will fare will be entirely dependent on the level of stock that is currently on the moors.   Some of the higher, wetter ground, particularly on the west side of the Pennines, still has a modest stock, but elsewhere there could be a long and productive season, and with a few outstanding results.

North York Moors – overall, not likely to be as good as last year (which was very good over much of the North York Moors) but it should still be a good season for this area.

North East Moors (Durham area) – could be very good in places, again because of the stock that was left.  However, we suspect that there will be significant variation, with some most moors pretty good and a few very good.

South of Scotland – the Lammermuirs could have some very good results and overall, we fell it should be good. Whilst we are expecting a considerable improvement on the 2018 season elsewhere and particularly for the western moors, we are not expecting great things yet.

Central Scotland – very mixed, with a few moors looking quite good, but a lot still very short of a good stock on which to “grow”.  Very much a building year here.

Highlands – whilst this will be mixed again, we very much doubt that many moors in the Highlands will be that good.  We have seen good quantities of grouse on some of the lower ground in Inverness-shire, but the higher ground still looks pretty thin stock-wise and as much of the Cairngorms, Deeside and Donside are high, we are not in the main expecting bumper things.

Overall, we see 2019 as being a better and, in many cases, a much better season than 2018 (but one has to ask could it get much worse!) and whilst there will be some moors which could have a lot of grouse, overall, this will still be a building year with the potential for better things in 2020.

We would ask those people reading this who are keen on grouse shooting, whether they do much of it or not, to make their views known to Natural England, on the absolutely farcical situation over the withdrawal of the General Licences in England (but not in Scotland).  Stirred up by Avery, Packham et al, Natural England reacted by withdrawing the General Licences last week and what has been put in their place is a real dog’s dinner. This will most certainly prevent the quantity of crows and magpies being caught which are needed, so as to sustain a wild bird population particularly in the Uplands (but also Grey Partridge which are very vulnerable). This is an absolute travesty and it is interesting how much adverse press coverage it generated over the week-end.  Poor Chris Packham never expected to have so many enemies and Mark Avery never expected Moorland Game Keepers to have so many friends!

Perhaps it will be the turning point.  Please complain to Natural England; 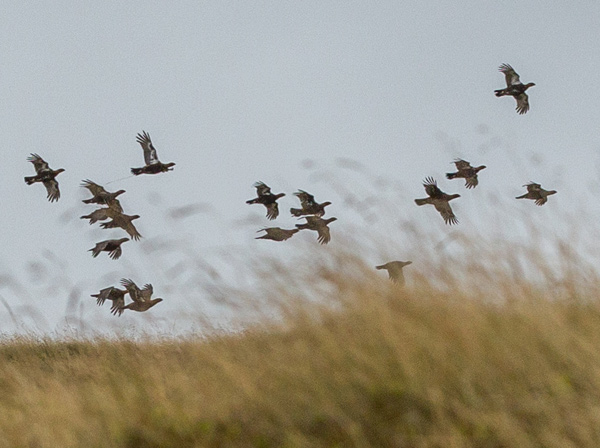