The Art of Double Gunning

A technique that allows you to focus entirely on your quarry

Ever since the advent of breech loading shotguns with cartridges became available to game shooters and driven game shooting first really took hold over 150 years ago, the use of a pair of guns rather than just a single one has been a desirable option for those sportsmen looking to shoot bags in excess of 350/400 birds.

On larger drives when the sky fills with birds, there is little time for scrabbling for more cartridges. The Victorians remedy for this was to use more than one gun (sometimes even three) and a loader to ensure they had sufficient fire power to take on the squadrons of pheasants overhead.
Indeed, our European cousins in Spain and others to the east have been doing the same thing for a similar number of years (albeit in Spain with the loader sitting down in front of the shooter as opposed to standing behind him as we do it in the UK – more of that later).
There is more art and skill in double gun loading than many first perceive. It takes experience and patience not only in terms of loading the guns, but also being the shooter, who has on demand a reloaded gun at his disposal. One of the tricks is undoubtedly never looking away from the horizon from which your target birds are coming. If you have to look down to reload or even turn to present an open gun to a stuffer (if you are using a single gun with someone assisting with a loader this is termed as “stuffing”) then vital seconds are lost before your eyes can refocus on the near distance and pick up the next curling pheasant or grouse twisting towards you.
Watching a Gun and his/her loader who have spent years together is like observing a well choreographed team which can function in all situations when presented with all manner of targets. It is not quite Torrvil and Dean, but footwork plays a big role and, as well as the shooter, the loader needs to be able to read the situation, particularly when in a grouse drive, so that he can anticipate in which direction his Gun will move to take the next bird. Knowing that a Gun prefers to take the birds early or indeed late will give him a vital second to position himself out of the way of where the Gun is going to be moving to, and therefore ensure he has an unencumbered shot.
Talking to those Guns who use loaders a lot, and indeed to their loaders, it also becomes apparent that they find a rhythm in which the shots are taken on the busier drives. There is little point in firing two barrels in quick succession in the knowledge that you have only just presented your loader with an empty gun and he will not be able to give it back to you for another second or two. A single barrel at a low percentage target leaves you with a second to take on the next bird rather than wasting both barrels with little hope of success.
If a Gun and loader fall out of sync, it can be very difficult to recover the loading – and -shooting rhythm unless there is a pause in the drive.
There are other things to be wary of. Obviously, safety is of paramount importance and where the gun is pointed is something which both shooter and loader need to be aware of at all times. In addition, the guns themselves can suffer damage with barrels dented during a fumbled exchange.
When meeting your loader for the first time (assuming it is your first day of double gunning and you do not have your own loader) it is often best to spend a little time practicing the exchange of weapons with empty guns before the shooting begins. This simple action gives both parties confidence in each other and lets a rhythm be established.
There are a number of methods that are suggested but there are also a few rules which cover all of these different variations.
Before looking at the actual process it is worth mentioning that, as already referred to, safety must be paramount. Shotguns are always exchanged with the safety’s “on” whether the guns are loaded, unloaded or one shot has been fired. This is of paramount importance. There is a practice in other European countries to ask for the safety’s to be placed in the “off” position by the loader so that the Gun can fire more quickly. This is not a practice allowed on our shoots.
The following instructions are for a right handed shooter (the reverse is appropriate for a left handed Gun):-

a. The Position
The loader stands close behind the shoulder which is being shot from before the exchange takes place. This avoids complications with passing the gun between both parties and potential risks of dropping the gun with its inherent dangers and potential damage.

b. The Exchange
After shooting, the Gun remains facing the drive looking for the next opportunity. His first action is to flick the safety “on” and hold the gun in his right hand by the grip in a vertical position close to his body. He then extends his left arm, palm open, across his body ready to receive the loaded gun.

The loader, holding the loaded gun in his right hand in an upright position, places the gun into the shooters left hand, firmly pressing the fore-end into the palm and triggering a reflex gripping action. At the same time the loader takes the fired gun by holding the barrels at the top of the fore-end thus preventing a clash of barrels during the exchange.

c. Loading
The loader then turns to his right gripping the empty gun with his left hand and lifts up the butt holding it between his forearm and body. With his right hand he pushes the top lever and opens the gun. He then reloads and closes the gun, holding it vertically in his right hand, fore-end out ready for the next exchange. The loader needs to be constantly aware of the shooters position and movement while being as unobtrusive as possible.

d. Equipment
Traditionally the loader has a large cartridge bag with an open flap and the capacity to hold sufficient cartridges for a big drive. In my experience this should be a minimum of 250. Reserve cartridges are often arranged in pairs in pouches or looped stitched to the outside of the bag for faster access.

e. Tips
Double Gun loaders or even “stuffers” are set apart from other shoot day staff as they are employed by the Gun and not the Shoot/Estate. Their payment is usually solely in the form of a cash tip and is received directly from the Gun at the end of the day. Tales of legendary tips abound – from guns to cars to a year’s college tuition fees in one case – but the norm is £70 to £80. It is true to say that great friendships can be struck and these can lead to great acts of generosity from the Gun. However, I am far too discreet to tell any tales although I still feel a little piqued that I have never received a pair of Purdey’s or even just Beretta Silver Pigeons myself!
The issue of which guns to use when double gunning is not a subject which is often discussed. The decision is made by looking at which guns the shooter usually uses and ensuring that he is comfortable with them. It is true that loading a side-by-side is easier and faster (by half a second or so) than an Over and Under due to it requiring greater movement to open the gun wider and access the lower barrel. The issue of ejectors over non-ejectors is pretty self-apparent!
Going back to the European – specifically Spanish style – of double gunning; they have a different way of ensuring that the shooter has enough fire power to deal with the large drives that can be the norm out in Spain. There you get two helpers – a Secretario and a loader. The Secretario is a spotter/scribe and marker of fallen birds whereas the loader sits on a stool just in front of you (facing you) and has the cartridge magazine and guns in front of him. When the drive starts, the loader reaches up and takes the empty gun and at the same time passes the shooter the loaded gun. This does take a little getting used to, but I have to say that, having watched it a number of times myself, I think on the measurement of pure speed that this is slightly faster than how we do it in the UK. It would not be appropriate, I believe, in a grouse butt due to the lack of room, but in Spain where you are standing in open gullies and fields this is not a problem and it seems to work well.
Double gun loading is not everyone’s cup of tea and some people prefer to shoot single guns and not have another person standing with them when they shoot.
In my own experience, however, having someone to share the highs and lows of any drive, and in particular another pair of eyes when shooting grouse, is something I would always opt for and some of my most enjoyable driven shooting has taken place where I have been lucky enough to be able to shoot two guns on some really challenging and busy grouse drives.

Next Article ⇨
Fog – The Spectre at The Feast! 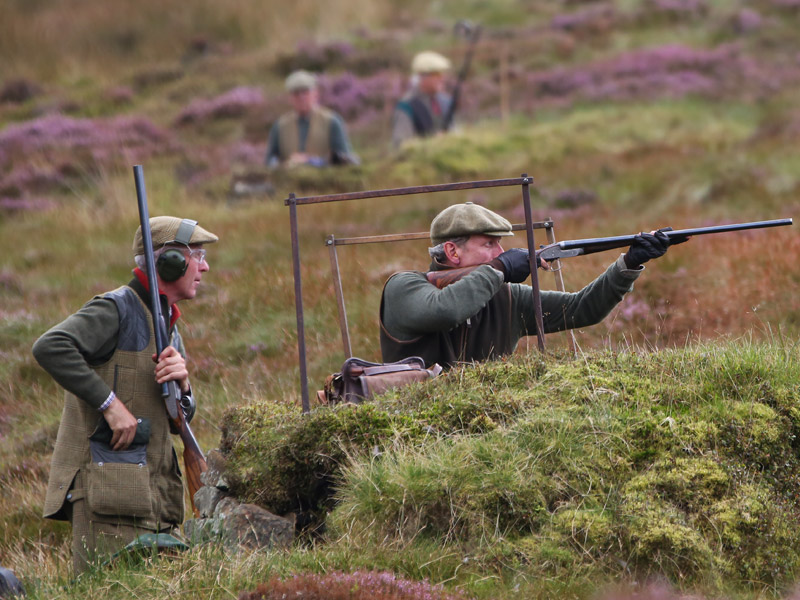